The presentation of a health pass will be mandatory to access the monument for anyone older than 12 years old and two months.

Find out more information about your visit here.

MARIE-ANTOINETTE AND THE SAINT-DENIS BASILICA

Between the 7th and the 19th century, 43 kings and 32 queens were interred in the Saint-Denis Basilica, and over 70 recumbent effigies and tombs from the 13th to the 16th century can still be found there. By the 18th century, the power of Saint-Denis abbey had been waning for around two centuries, but the sovereigns would still visit it for spectacular funerals. Indeed, Marie-Antoinette attended the funeral of Louis XV there when she was not yet 20.

The Bourbon kings were all interred in a vault in the crypt, the Bourbon vault, in lead coffins encased in wood and placed on metal trestles, but without any sculpted image. Today, there are just the two sumptuous priants of Louis XVI and Marie-Antoinette in white marble, commissioned during the Restoration by Louis XVIII, the brother of Louis XVI, in 1815.

The Desecration of the Royal Tombs of Saint-Denis 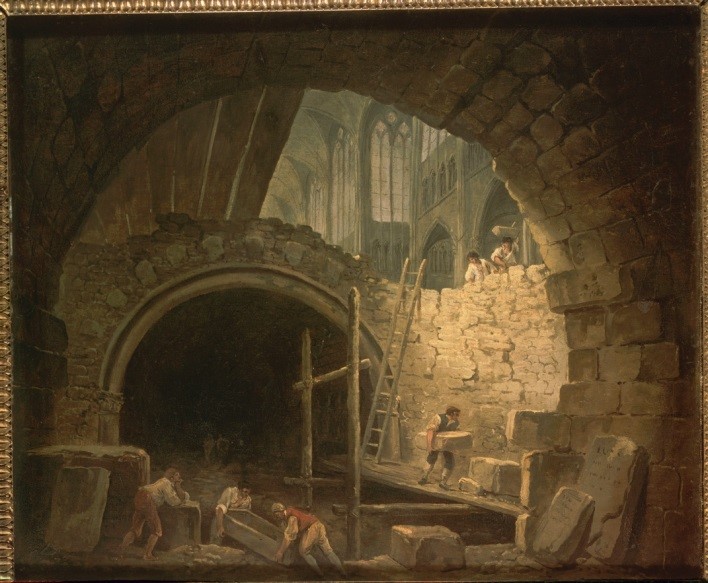 A few months after the death of Louis XVI, guillotined on 21 January 1793, and while Marie-Antoinette was imprisoned at the Conciergerie, the Convention ordered the tombs in Saint-Denis to be demolished in order to commemorate the first anniversary of the fall of the royal house on 10 August 1792. This was partially carried out between 10 August and 25 October 1793.

The Necropolis during the Restoration

On his return to the throne in April 1814, Louis XVIII decided to revert to the Basilica for the interment of Bourbon sovereigns. He then removed the vault that Napoleon had installed for his own tomb in the crypt.

These works preceded a grandiose funeral ceremony organised on 21 January 1815, the day of the anniversary of the execution of the last monarch, during which the ashes of Louis XVI and Marie-Antoinette were placed in the crypt. Excavations were ordered to be carried out in the former cemetery of the Madeleine in Paris, which the owner, Pierre Louis Desclozeaux, had ceded to Louis XVIII: Desclozeaux had planted trees to commemorate the site of their burial. It was on this site that a commemorative chapel was later built, known as the Expiatory Chapel, designed by the architect Pierre-François Léonard Fontaine assisted by Louis-Hippolyte Lebas. 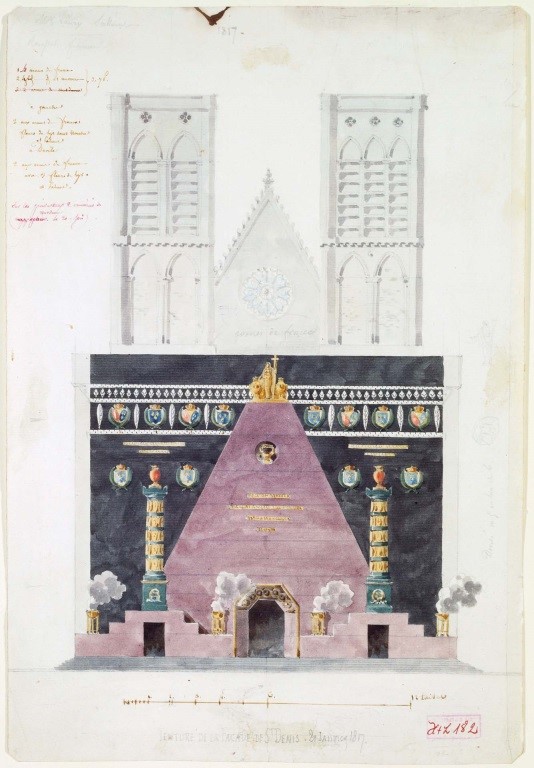 Jacques-Ignace Hittorff (1792-1867), Hanging for the façade of Saint-Denis in commemoration of the death of Louis XVI and Marie-Antoinette, 21 January 1817. Pencil and watercolour. © Cologne, Wallraf-Richartz-Museum and Corboud Foundation.

Four allegorical figures representing the virtues appear here, together with the French royal coat of arms. In front of the entrances, a pyramid bearing the crown of France is flanked by two columns supporting funerary urns.

The choice of this decoration is a reference to the funeral symbolism of the Egyptian pyramid as well as to the masonic vocabulary used in the lodges. The two columns are symbols of the two bronze pillars that Solomon had placed on either side of the entrance to the Temple in order to mark the transition from secular space to holy space. It is not certain that the decoration was completely finished on the day of the ceremony, but the decoration and the ceremony were nevertheless carried out on an extraordinary scale. 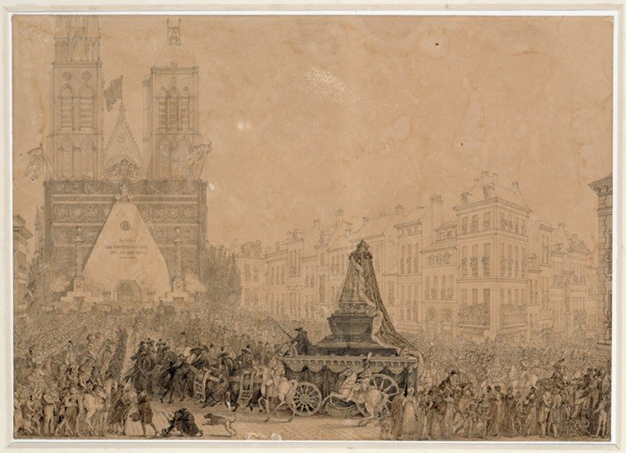 A funeral carriage drawn by eight horses, the symbol of the monarchy, carried the royal ashes from Paris. They were placed in a faux marble sarcophagus, on which was placed the royal mantle, surmounted by a dais bearing the French crown.

The sumptuous decoration of the Basilica for the ceremony 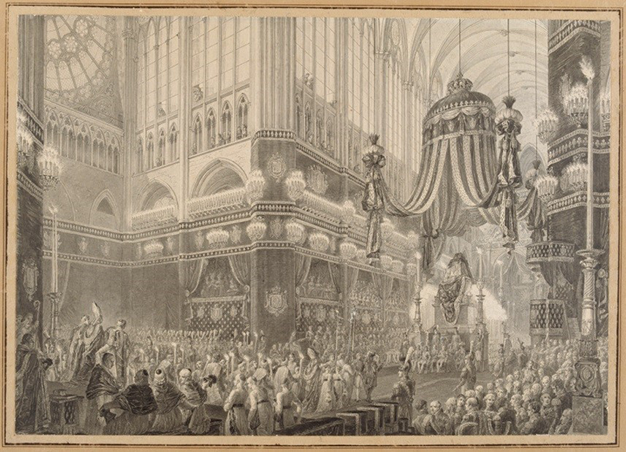 Bélanger had also designed the interior decoration of the church: we know this through a drawing by Dugourc. Black material was hung on the walls up to the level of the first upper gallery; the triforium, coats of arms and silver palmettes were arranged on the hanging. A gigantic Gothic-style triumphal arch was placed at the entrance of the choir in the Basilica, and a large hanging, surmounted by the royal crown, was suspended from the ceiling above the sarcophagus. Finally, two large torches, four copper crowns and numerous candelabra completed the decoration.

The two coffins were laid out on the catafalque. The seats at the side were for the princes of the blood, the royal family and the court. The great dignitaries, members of the Chamber of Peers, marshals of France and ministers were placed in the stalls in the nave. In the choir, accessed via eight steps in black marble, the musicians were placed on the north side, and the clergy on the south side.

The protocol was highly complex and the ceremony very long. The homily lasted three quarters of an hour. The entire royal family was there: Monsieur, the future Charles X, the Duc d’Angoulême, his eldest son, the Duc de Berry, his second son, the Duc d’Orléans, the future Louis-Philippe, the Prince de Condé, the Duc de Bourbon and the Seigneur de Chantilly.

The Return of the Royal Ashes

Two years later, Louis XVIII ordered a search for the royal remains, which, after the tombs had been desecrated in October 1793, had been thrown into two common graves in the former cemetery situated to the north of the Basilica. Although the same person as in 1793, M. Scellier, was called in, it seems that the royal remains were only found with great difficulty. 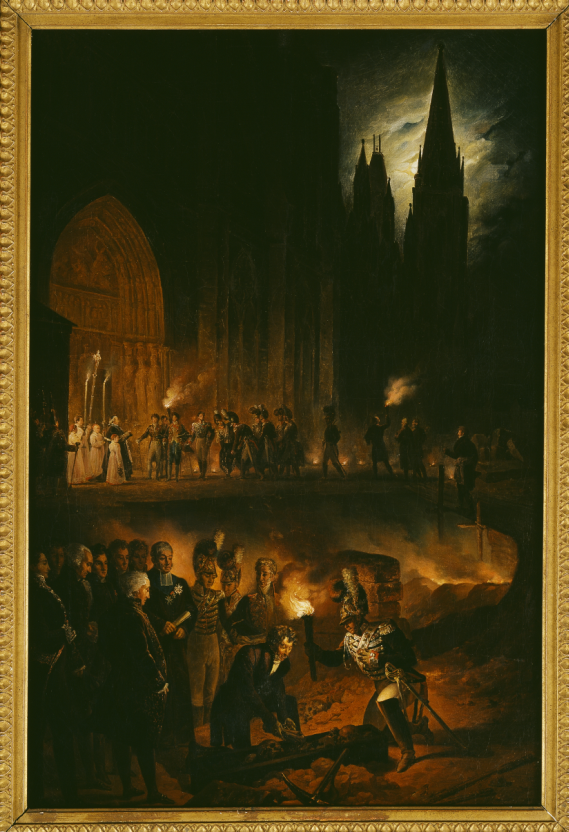 François Debret, the architect who restored the Basilica between 1813 and 1846, sketched the scene that enabled the painter Heim to produce one of his huge canvases, which still adorns the sacristy commissioned by Napoleon in 1806. In it, we see a procession, lit by torches, moving towards the north door of the Basilica, with the moon visible behind the monument’s steeple. Ten coffins, stamped with the coat of arms of France, filled with bones, were placed in an ossuary in the crypt behind large marble plaques engraved with the names of all the sovereigns interred in the necropolis since Dagobert. Since then, under the terms of an order by Louis XVIII, every 21 January and 16 October, a mass is held, known as “the end of year” mass, in memory of the beheaded sovereigns.

The Priants of Louis XVI and Marie-Antoinette

On 24 April 1816, Louis XVIII ordered alterations to the Royal Basilica. One of the projects involved the installation of an expiatory chapel to the north of the building, the plan for which still exists, thanks to a fine drawing by François Debret. In this, we can see the two priants of Louis XVI and Marie Antoinette, still in place in the monument, but on the south side. 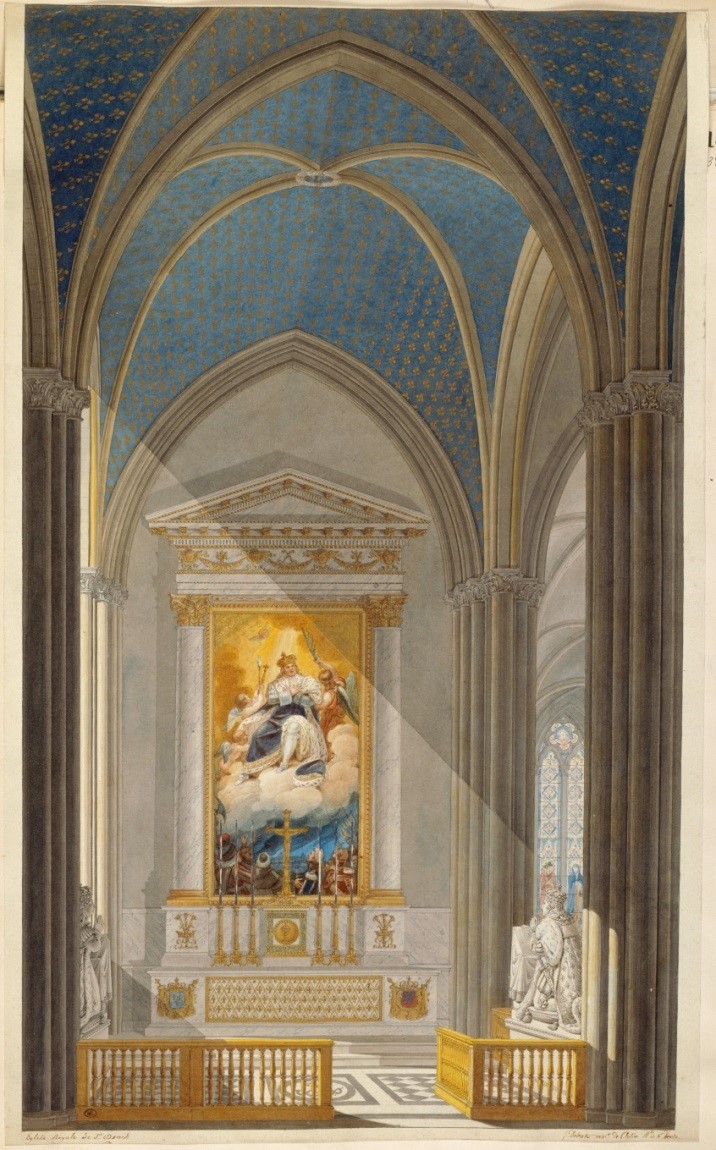 The two priants were part of one commission but it was given to two sculptors: Pierre Petitot for the queen and Edme Gaulle for the king. Petitot finished his work in 1819, but Gaulle would only finish his, after numerous difficulties, in 1831 because of the many criticisms addressed to him. The first two small models were presented at the 1817 salon, but the Secretary of State for Fine Art noted that the artist needed some advice: the fact that these works were destined for “a temple that would arouse the curiosity of French and foreign visitors” required them to be of the highest quality, a true likeness and expressing nobility.

The priant of the king would not be finished until after the revolution of 1830, and therefore was placed directly in the depository adjoining the basilica, where that of the queen quickly joined it. During the 19th and 20th centuries, the priants of Louis XVI and Marie-Antoinette were moved on several occasions, from the crypt to the upper church, before being moved, in 1975, to the current Saint-Louis Chapel in a new position where they are now reunited on a shared plinth. 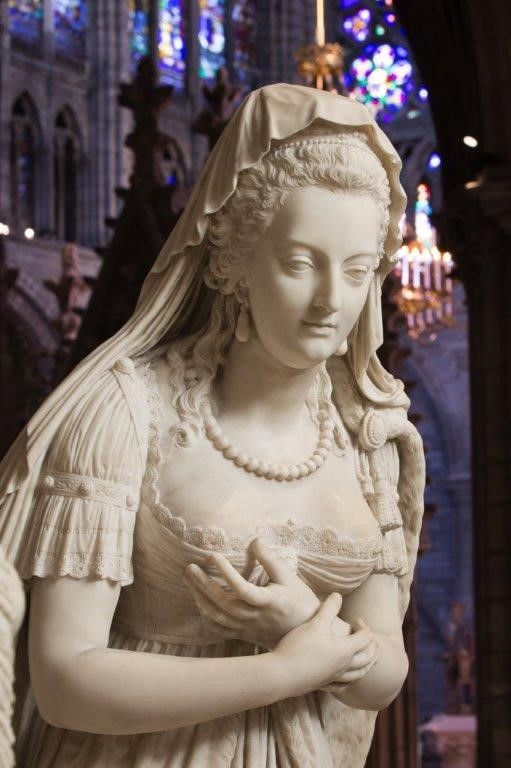 The king is represented with his hands together in prayer, whereas the queen, shown in a movement of adoration, wears a court dress in the style of the time when the sculpture was produced. On the prie-Dieu in front of the king is the last testament of Louis XVI, and on the queen’s prie-Dieu, her final letter to Madame Elisabeth.

By commissioning these priants, Louis XVIII was re-establishing the great tradition of the sculpted monuments of Saint-Denis, the last monumental example of which was that of Henri II and Catherine of Medici.

By pursuing your navigation(browsing) on this site, you accept the use of cookies.